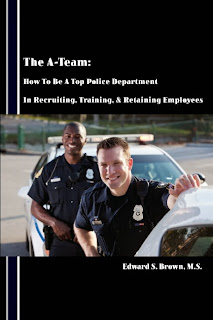 The good news is that some of the biggest challenges dealing with personnel, such as recruitment, training, and retention have practical solutions. It is understood that having an effective feeder system when either police personnel resign, retire, or die is essential for the longevity of any department.  With the Millennial Generation assuming the ranks, engaging training and opportunities will be important now more than ever.  A police leaders’ ability to look 5, 10, or 15 years into the future is determined by their ability to discover new and relevant information that they can analyze and input into their current operations.

Q: What, if any, research have you come across that suggests recruitment, training, and retention will be on the front burner in 2014?

Brown: Recruitment and retention problems are ongoing and pervasive. Yes, Background and Recruitment exists to discover and hire the best candidates, but the best candidates for policing, often don’t want to be police officers.  I’m hearing cases where departments are hiring police officers with drug histories, because they aren't attracting the best and the brightest. This was unheard of when I joined the Atlanta Police Department 25 years ago.

Q: Okay, it is understandable that extended drug usage could be a problem. Particularly when enforcing  drug laws. But, does this one problem muddy the water of potential police candidates?

Q: How might police departments exploit the publicity of these shows?

Brown: By morphing art into reality.   One of the biggest things that brought down the head of the Gambino Crime Family’s, John Gotti, was his morphing art into reality. Gotti was taking his cues from Mario Puzo  and Francis Ford Coppola of “The Godfather” movies. Gotti had ruled out Omerta’ or the mob’s “Code of Silence” in favor of being a star.  This was a boon for law enforcement in breaking the back of organized crime. “The Godfather” made crime attractive, which brought down Gotti and his henchmen. Police departments can use similar strategies with shows like “Law & Order” to attract quality recruits by highlighting how certain skill sets can be used within police departments when a candidate has certain expertise.

Q: Do you have any evidence that aspiring police personnel are actually motivated by police TV shows?

Brown: Yes, there have been studies that show a connection between the media and cultural behavior. I will not go down that slippery slope to refute the argument around the media and the increase of violence, but I suggest that more people want to be in the “CSI” unit within police departments now than before the show started airing. If nothing else, shows like “Law & Order” and “CSI” show what police personnel do. These shows are better than any police recruitment brochure or flyer.

Q: From a practical perspective, how could police departments exploit these shows for recruitment and retention?

Brown: Well, you have to tie personality types and self-interests to specific police responsibilities. If police departments want to expand its CSI section, college students majoring in biology, chemistry, or physics might be a target at police job fairs.  Since police budgets are limited, a group of departments could pool their resources to hire a TV star from “CSI” and let the star be the face of recruitment. The prospective candidate has morphed his or her fantasy of solving crimes through science into reality. You can do this for any position or role within police departments. The thing to remember is to tie the candidate’s self-interest to a need within the police department.  As such, the interest and imagination of the prospective police candidate become the focal point of police recruitment. If it has worked for military recruitment, it can work for law enforcement.